I pulled up behind the truck, finally close enough to really read the bumper sticker: “STOP GLOBAL WHINING”.
Humor is often based on a surprise—a word trick that suddenly spins the world sideways or upside down.  This surprise made me shriek with laughter.  I don’t really know why, but I giggled all the way home.  It’s a good thing I was alone. I might have scared somebody.
Aside from the obvious reason it amused me, I was delighted to have a humorous reference to a practice that otherwise falls on a scale in my mind somewhere between Mildly Annoying and Infuriating.  Circumstances, persons, and duration influence where it sits on that scale at any given time.  Whining does appear to be ‘global’….

Growing up as a compliant child, I quickly learned not to whine.  Whining was met with frowns, scolding and even derision.  I was incredulous that other children, my younger brother included, continued to use it as a method of wearing down their parents.  I was shocked to learn that if one persisted, it even worked sometimes!  Still, I couldn’t bring myself to do it.  It was just one of many things in childhood that fell into the “life isn’t fair” category.
When my children were small I used a variety of methods to discourage whining.  After all, there were four of them and one of me, so I tried my best to keep them off balance.  A terse, “Stop it!” with “The Look” could be useful for its surprise value.  “I can’t hear you when you use that tone of voice”, although untrue, was helpful on occasion.  It became my default response eventually, abbreviated to simply ignoring the whiner.  Another sibling usually had to whisper, “Shut up!  She can’t hear you if you whine, remember??” to make it actually sink in, but eventually all four of them got the message.  Complaining was ok sometimes, but not whining.
There are whiners in the classroom as well.  Can I get an “Amen!” from all the 1st Grade teachers out there?  And from the High School teachers?  In the 4th grade classroom I could usually extinguish it in the first couple of weeks by referring to whining as “3rd grade behavior” .  No 4th grader wants to go back to being a “little kid”.

There is one place I have not been successful stopping whining, though, and that is on the ranch.  Alpacas just don’t respond to my usual methods.  We have had some World Class Whiners out here at Windy Hill.

Quicksilver came to us from Maryland. She had had one female cria, a very lustrous girl named Resi.  Quicksilver was not much to look at herself, but she produced very pretty babies for several years.  The other thing that she produced was copious amounts of whining.

Quicksilver did the usual humming to her crias and quibbling at the feeder, but when she was put in a small pen for any reason, she would whine.  She whined about being out of the pasture, about being haltered, walked, sheared, and examined.  She whined frantically if her cria would get too far away, and when weaning day arrived, Quicksilver would settle in for a Marathon of whining.  Fortunately, Quicksilver’s crias did not grow up to be whiners.  Not until Naiisha.
Naiisha is Quicksilver’s daughter by Apache, and she a lovely girl. She now belongs to Julie and Jamey, and is a model alpaca.  When she is open she is quite affectionate, and can change overnight into a witchy pregnant female.  But pregnant or not, if you put Naiisha in a pen, she whines.
Showing Naiisha was always a musical affair.  She would start whining as soon as I led her to the trailer, and continue until I took off her halter in the quarantine pasture when we arrived home.  She wasn’t frantic. She didn’t pace.  She just whined, non-stop.  Have you ever heard an alpaca whine while chewing their hay?  It’s a little muffled, but clearly recognizable as whining.
Now Naiisha has a daughter named Dakota.  I don’t remember Dakota whining as a cria, so it may be that weaning was the catalyst in her case, but for a solid week she and her mama paced on opposite sides of the fence, whining a duet.  They would sing to each most of the day, and at night they would sit side by side at the fence.  In the morning the pacing and singing would begin all over again.  Fortunately it only  lasted a week.  Dakota is a big girl now, but still whines if she is penned up.  I guess it just runs in Quicksilver’s family.

Another vocally-expressive girl is Spring Reign.  Spring Reign is a large girl loves treats, and is sweet and easy to handle, which is always good with a really big girl.  However, when she was due to deliver her first cria, we discovered that Spring Reign was more than a bit of a prima donna.
I watch the “OB” pasture closely for the last month of our girls’ pregnancies.  You never know when one of them may deliver early, need help, or pop a cria out while you’re at lunch.  One morning on my first visit to OB, I heard a loud noise before I even rounded the corner from the office.  It sounded like…well…a MOOSE!  As I reached the gate I saw Spring Reign lying flat out on her side.  When she saw me, she got clumsily to her feet and walked toward me. When she was sure she had my attention, she carefully lowered her huge belly back to the ground, flopped on her side, and began again to bellow.  Needless to say, I was alarmed. I saw that her due date wasn’t for three more weeks.  “I hope she’s not in labor!”, I thought.   Just then, she let out another thunderous groan, rolled up into a cush, then flopped over on her other side and repeated the whole cycle.
I called the vet.  Dr. Jana checked her thoroughly and assured me that she was not in labor, was not presenting a uterine torsion, and did not appear to be in any kind of pain.  She just wanted to bellow.  She was huge and miserable and it was warm outside.
I think that was the first time I really equated an alpaca pregnancy with a human pregnancy.  I thought back to the last month of any of my pregnancies.  How did I feel?  Like groaning, of course. I called it the Beached Whale Phase of pregnancy:  I couldn’t get up,  I couldn’t get down, there was no good way to sit or stand or lie down, it was too hot, I only wanted ice cubes to eat, and if you were not interested in rubbing my swollen feet, you better not touch me.
Spring Reign continued her daily bellowing.  I called the vet twice more before she convinced me that there was nothing wrong.  When she finally did go into labor, Reigny delivered her baby with grace and ease, and the bellowing stopped.  Until the next year.

I guess the truth is that we all whine now and then.  I’ve learned that people are much more tolerant of it if I announce ahead of time that I’m going to whine.    If you expect whining, it’s a little easier to take.  “Oh, there she goes.  She is whining again.”  We can all acknowledge it, then go on.  It certainly seems to be a global problem.
The bumper sticker begs the question: CAN we stop global whining?  Do we NEED to stop global whining?  It’s one thing for a bumper sticker to demand it, and quite another to really expect to conquer something so ubiquitous.


I think I’ll wait until I see peace in the Middle East, good manners on the freeway, and Naiisha standing patiently in a pen.  Perhaps then there will be some chance of ending Global Whining. 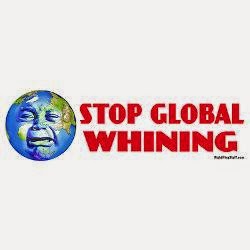 Posted by Cindy Harris at 5:39 PM No comments:

What Do We Want To See in 2024? Imagining the Future Together 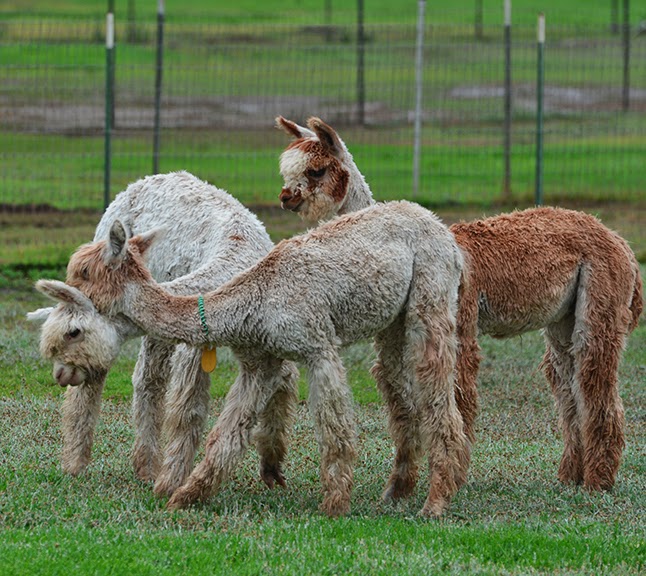 What will happen to our wonderful herds of alpacas in the next 10 years?  Imagine with me for a moment what the alpaca industry might look like in 2024….

“Alpacas?  Weren’t they like ostrichs?  People used to pay ridiculous prices for them but the bubble burst.  Now you don’t hear about them much anymore.”

“Alpacas?  Yeah, they tried to make them into livestock.  You know—sell the fleece to make money. But the recession of 2008 came before they got their act together.  Some people tried to create a meat market, but it never caught on.  I know people who still have a few in their back yards, but there isn’t much use for them.  I haven’t seen one of those TV commercials in years!”

“Alpacas?  Oh, they are so adorable, and their fleece is to die for!  My whole winter wardrobe is alpaca, and it’s all made in the US.  Cashmere and merino used to be the go-to natural fibers for cold weather, but now if it’s not at least 50% alpaca, I won’t buy it.  It’s the only thing I can comfortably wear that lasts.  I even have alpaca upholstery on my couch now—it’s beautiful and hardly shows wear, even after five years and three kids!”

Which scenario would you rather see? 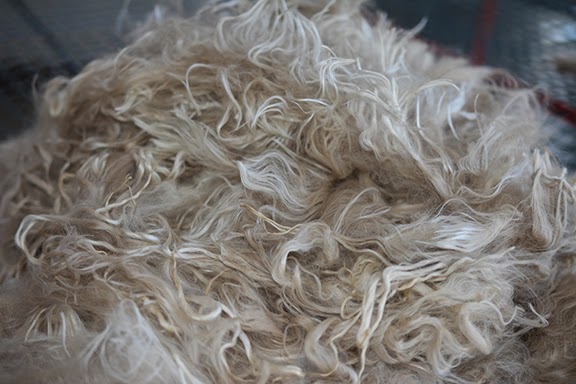 I “see” a real future for the alpaca industry.   And what do I want it to look like in the future?
Here are some of my answers.  I would like to hear yours.  It’s time to cast a new Vision…

What do you want to see happen in our Alpaca Industry? 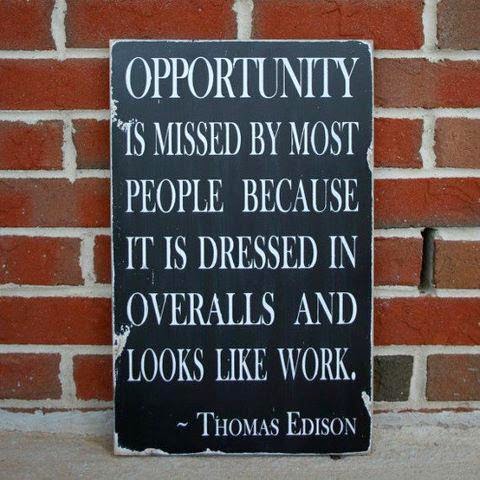