The Miraculous in the Everyday

Miracles come in many sizes, shapes, and circumstances.  I often feel that we live in th
e realm of the miraculous here on the ranch.  Just waking up every morning in this setting feels downright miraculous.  It's where I've always wanted to be.

But some days are just a little more miraculous than others.  Today was definitely one of those days.

We had finished our usual Tuesday "Vet Day" with Dr. Jana--ultrasound, blood draws, checking up on previous procedures on some crias--and retreated to the ranch office for some cooling off in the air conditioning on a hot Indian Summer day.  Everyone went home except Lynette, so she and I ate lunch, untangled and re-wound some yarn, and chatted about crochet patterns.  At about 3:00, Lynette wandered out to take a look at the girls in OB, and called me to say that Maria was looking very uncomfortable and could I come look at her.

My shoulders tensed as I walked out to the pasture.  Something late in the day in the OB pasture usually means that there is a problem.  And sure enough, there was Maria getting down, getting up, getting down, rolling on her side, getting up, walking to another site, getting down……all the restless labor signs, except for the pushing.  This was definitely a problem.

I got my OB kit, a bucket of warm water and a halter from the barn and headed out to catch Maria.  Maria is a small maiden girl, but the product of Torbio and Matilda, a combination we had high hopes for.  My exam confirmed what I had already guessed--we had a problem.  Open hymen, spongy ligaments, developing udder, but no nose presenting and several inches of absolutely nothing past the pelvis.  I called Dr. Jana, who although she was at another call, dropped everything and came back--bless her heart.  30 minutes later we were ready to begin something that turned out very differently than I had expected.

Dr. Jana's exam confirmed what I had guessed was the problem.  It was a breach-- tail first, and very tight.  This called for heavy sedation and heavy-duty lube.  Dr. Jana prepared us for the possibility that we could lose the baby or both, but Doug and I agreed that we didn't have any choice.  A C-section was out of the question in this economy.  So with tighter shoulders and resolute focus, we prepared to deliver the cria back-feet-first, wondering if we could get them turned, wondering if there was any chance she could live.  Lynette breathed the prayer I was thinking: "Dear Jesus and St. Francis--please help this cria live and help Dr. Jana."

In order to give the vet room to manipulate the legs around so that they could be pulled, we faced Maria with her head downhill, letting gravity cause the baby to fall toward mom's head.  One foot was free when Maria did an amazing thing.  Through her sedation, she stood up in the hind end, leaving her head on the ground and her front feet in a cushed position.  It was exactly the thing we needed--part of the miracle-- and Dr. Jana was able to get both feet positioned to pull. 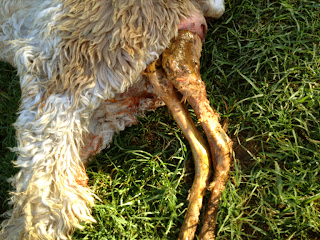 The back legs came out a startling bright yellow-orange.  The muconium had spilled and bathed the cria in feces.  Chances were good she had aspirated it into her lungs as well.  Due to her lack of movement and color, we assumed the baby was dead.  Her eyes were closed and she was covered with the orange color and fecal particles.  Disappointed but unwilling to see this as a complete loss, I began setting up to harvest the colostrum to freeze, and planned to put Maria in with another mother who was having trouble producing enough milk, in the hope that Maria would help feed the other baby.

As Jana and I began the mop-up on Maria (she was still very groggy), Lynette suddenly burst out, "This baby is BREATHING!!"  And sure enough, the dead cria was breathing….and moving around!  We'd forgotten to take into account the fact that the cria was also somewhat sedated from the dose we gave her mama.

We were all stunned for a count of 3, then Dr. Jana picked her up by her hind legs and swung her a bit, and began rubbing her with a towel.  Her heart rate and respiratory rate were extremely fast, but the fact remained that her heart and her lungs were both working!  We took her to the barn and began drying her off with the hair dryer to keep her body temperature from dropping as the sun went down.  Maria started to wake up and got to her feet, so we whisked her off to the barn as well.  Pretty soon it was party of drying and rubbing and cleaning and giving antibiotic shots (to both girls) and milking colostrum and tubing the baby and the baby trying to get up…..Our new friend Linda had joined us on her way home from work, so we put her to work too!

I would say that 30 minutes to standing is about an average time for our crias.  20 minutes is exceptional, and once in awhile we get one that stands in less than 10 minutes.  Today's little girl, despite her horrendous beginnings, her share of the anesthesia, and having been crammed into a space too small for her 12.5 lbs, was on her feet in 30 minutes.  I still can't quite believe it.  It still leaves me a little breathless. 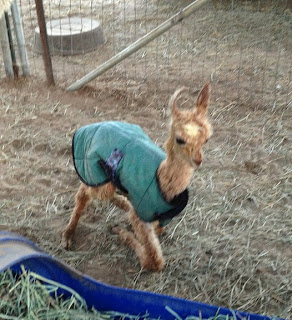 Once the baby was dry, we put a coat on her and took her out with her mom to a small pen by the barn.  Maria had been very dopey while we were fussing with her in the barn, but now she seemed like her old self, and began clucking to the baby, nuzzling her and humming.  This was the last bridge to cross--would maternal instinct kick in after all the intervention and interruption in the normal flow of the birthing process?  The cria responded by trying again to get on her feet, and before we knew it, she was hunting for the source of the milk I had tubed her with, her mom standing like a champ for this little baby to nurse--the baby we had given up for dead.

God honored Lynette's prayer.  Dr. Jana's skill and experience saved the day.  Mom and cria went along as though nothing unusual had happened.  The miraculous once again appeared in the here and now.  God brought us the miracle of life today, and we are so grateful.
Posted by Cindy Harris at 11:11 PM No comments: