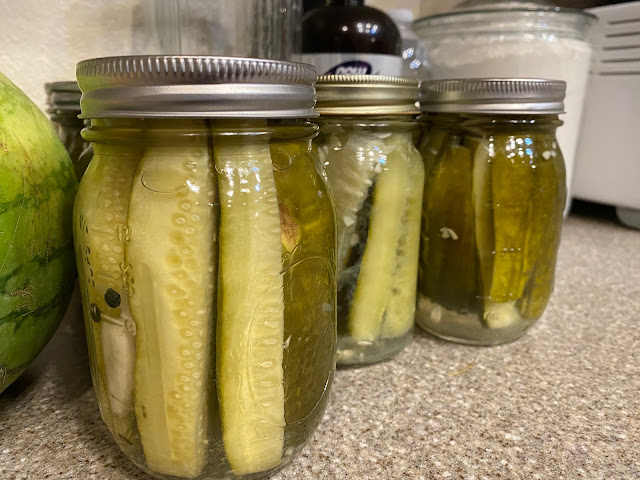 My cucumbers are producing like gangbusters!  Everyday, it seems, I fill my sink with new ones.  I mean, how many cucumbers can a girl eat?? 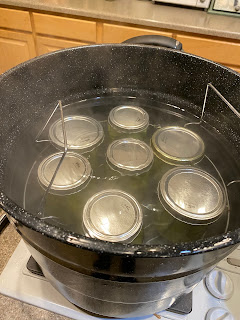 Soooooo…. I’ve started making pickles!  What fun it is to see the jars stack up.  Dill pickles, sweet pickles.  There’s something so satisfying about filling jars with goodies to eat later when the season is long since gone.

Here it is, 4th of July again.  I think of pickles and picnics and barbecues.  I remember my father and uncle gleefully setting off fireworks in the back yard when I was little, and being afraid of sparklers and big booms.  And it seems to me now that our world is in a bit of a pickle, with big booms and earthquakes and rumors and plagues.

In times like these, I am so thankful to be on the ranch.  Somebody posted a meme to Facebook  that went something like this: "If a world-wide plague happens and you find that your life doesn't change, you must be in the right place."   I think they have a point! 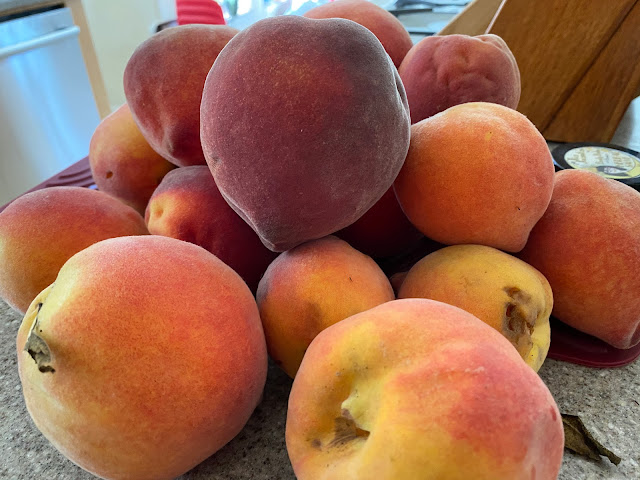 The peaches have all decided to get ripe at the same time.  I discovered an easy way to peel them, though.  I used a slotted spoon and dunked them in boiling water for a minute or two. The skins just slid off like nobody's business and made nice neat slices.

This was the week to send in my fleeces for the AOA Fleece Show.  It was wonderful to spend time going through my 5 fleeces and skirting them for the show.  I have learned not to obsess on skirting.  Now I discard the coarser fiber around the "skirt" of the fleece that represents the lower edge of the blanket, then pick as much vegetable matter out of it as possible.  The last step is to roll the fleece back up in the same paper or plastic that it came in so the judge can see the logical layout of the alpaca's body when they runroll it.  It makes it easier for them to judge when they can see where the neck and the tail used to be. 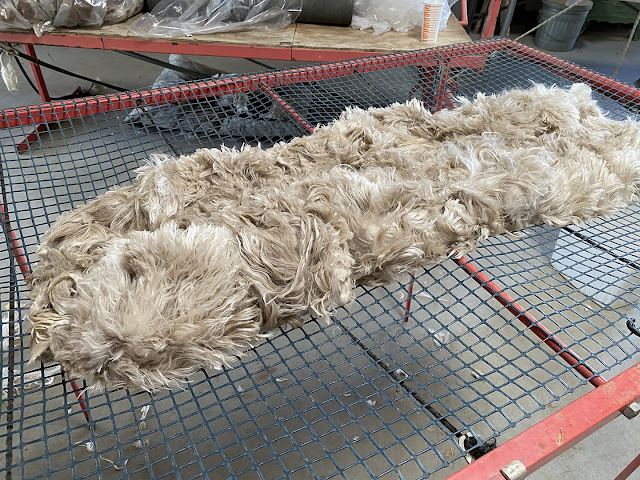 This fleece is Kalino's 3rd fleece.  We've started breeding Kalina this year.  Based on his show and fleece records, he should sire some really nice crias for next summer. On Wednesday Dr. Patty Temple came to see us.  Dr. Patty is my chiropractor, and she also works on animals.  She is very adept at diagnosing the spinal and muscle problems the alpacas have.  She has been out many times over the years for various alpacas.  This time she came to see Archimedes,a 2-year old suri who has a pickle in his hip that we couldn't completely resolve.  Since Dr. Patty treated him, Archimedes has been walking better and eating better.  He looks brighter every day.  She will be back to see him once more this weekend. Lucky guy! 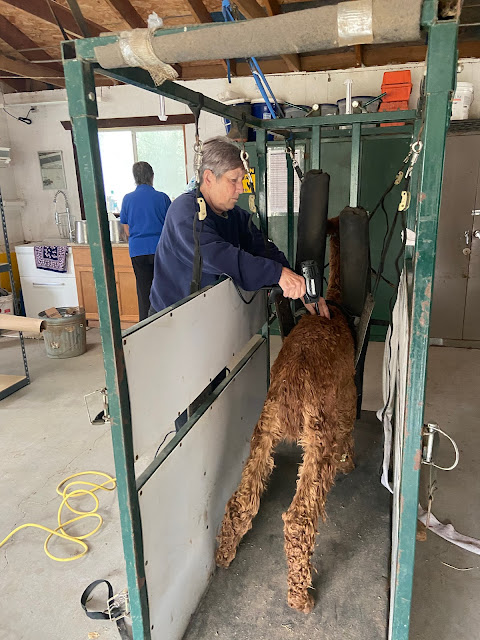 Walking across the ranch today I noticed that Meadowlark was standing off by herself and appeared to be restless, maybe caught on the fence.  When I got there I discovered the reason why-- she had pushed her head through the fence to reach what appeared to be a bowl full of fresh grass.   What a pickle! Alas, it turned out just to be the same grass sticking through the whole in the bottom of the bowl.  What's that about the grass being greener on the other side of the fence?I helped her out of her pickle finding her way back through the fence...and removing the "bowl". 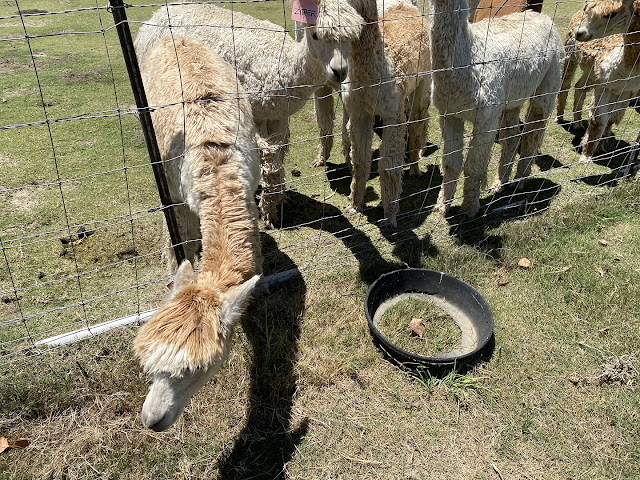 Wake Up Little Suzie went to her new home yesterday.  We will miss her and all of her escape-artist-antics.  I never knew where Suzie would be on any given morning.  She had her own route through all the fences at the end of the north pastures.  It's amazing that she never got herself into a pickle!She knew the sound of the pellet vehicle and would always be first in line--in any pasture!  I know she will enjoy her new home.  The daughter of the family who came to pick her up said she likes Suzie best--better than any of the other alpacas.  💓 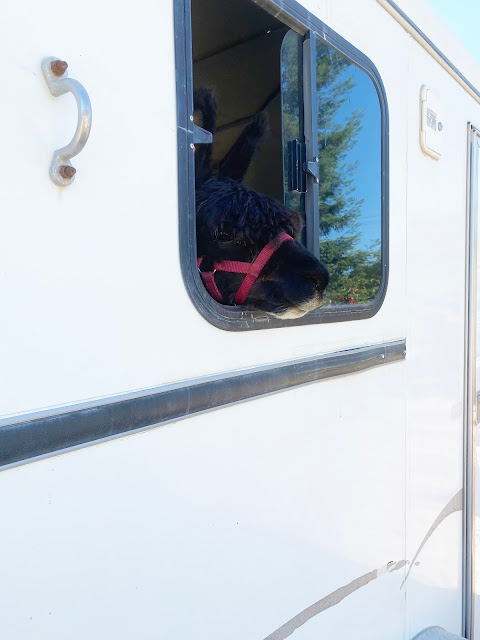 We at Alpacas at Windy Hill wish you a fantastic 4th of July!  If you need a little R&R in the coming weeks, give us a call.  We can all hum along with the alpacas together.


In the meantime, here is a video I just had to pass along today.  Hopefully this beautiful song will bring a tear to your eye, too.
https://www.youtube.com/watch?v=gs0fxy8rHo8