What a fun adventure we had!  My friend Ellie took the Navigator seat, and off we went.
We left home with 10 alpacas and returned with 4 (none of the same ones we left with).  The trip fit neatly into a week.  We had 4 alpaca stops, and 2 relative stops.  We ate junk food and didn't gain any weight (how did that happen??), and had a jolly time.

The first day we headed for Alpacas of El Dorado to drop off 3 girls for breeding.  Laurie Findlay is a great lady and she has a beautiful ranch in the foothills of the western Sierra.  We drove through gorgeous terrain, including several vineyards.  The hills were still green for the most part, so the scenery was lovely.  Here is a particularly beautiful vineyard we passed. 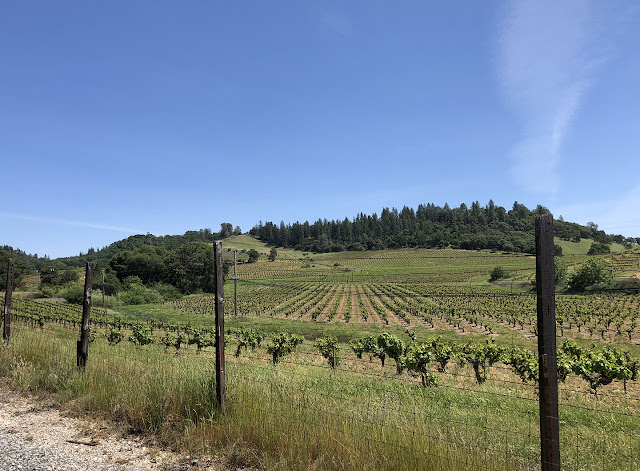 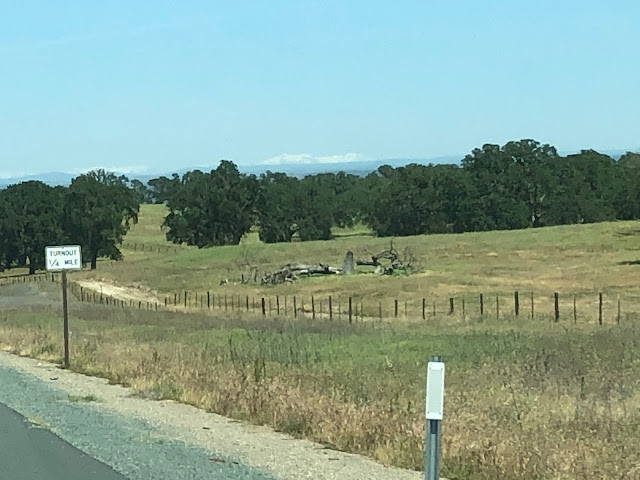 Ellie's brother Bob was our first and last stop in Anderson, CA.  They put us up and fed us dinner.  It was great.  Along the way we had great views of Mt. Shasta and Mt. Lassen covered with snow.  Lake Shasta was VERY full of water! 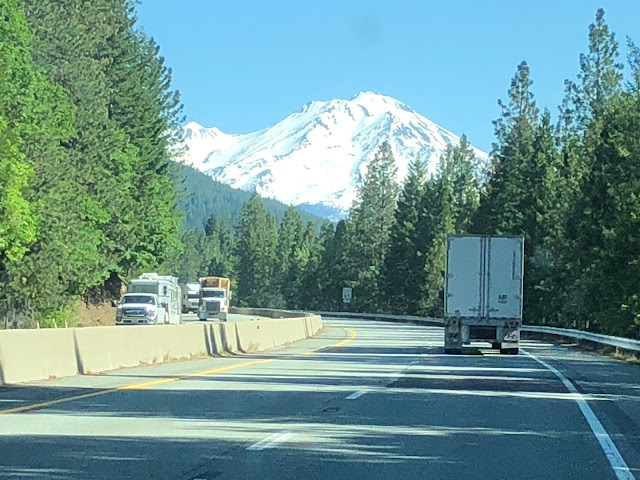 The next stop was Big Timber Alpacas in Oregon.  Sue King met us as the barn so that we could take Dare Me Wingman in, weigh her in, and leave her to breed to Fyre Dancer.  Fyre Dancer has knocked  it out of the park in the show ring the last 2 years, and Dare Me is hot stuff herself, so I'm excited to see what we get from this breeding.  😊 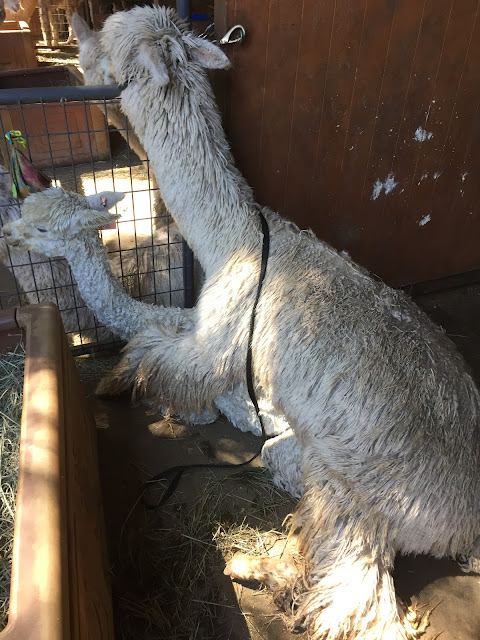 After going through Portland, we turned east and headed for Kennewick, Washington.  The drive across the Columbia Gorge is something everybody should see, I am convinced.  Just wait until all the parks open again.  You could probably spend days exploring Lewis and Clark's path. 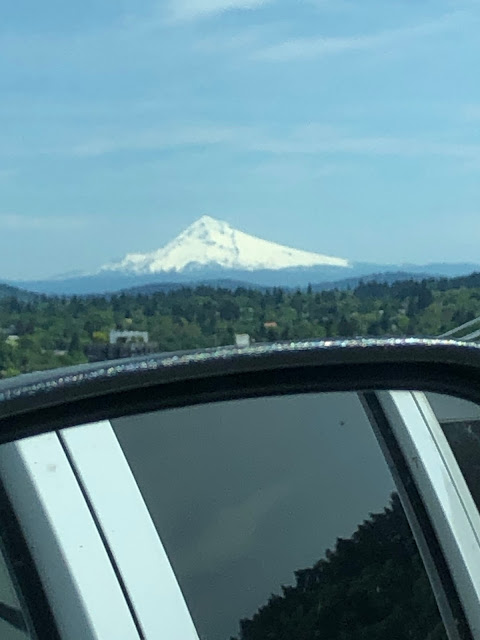 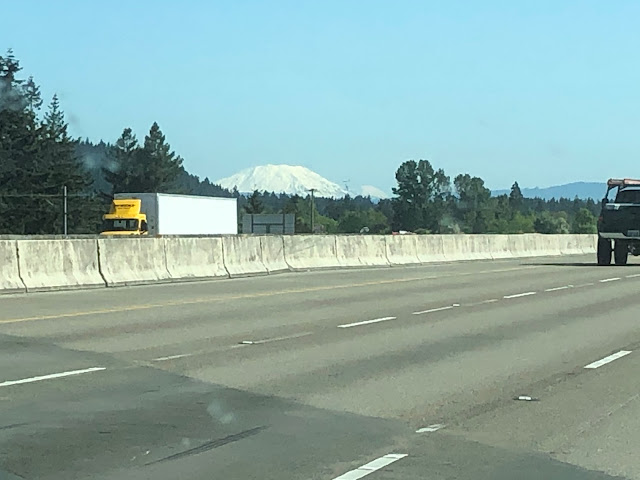 Mount St Helens (see how the top isn't pointed anymore since it blew off?)


On the east end of the gorge, the mountains get really bare like a desert.  Where they have water, they grow a lot of hay, and where they don't, they make lots of wind power. 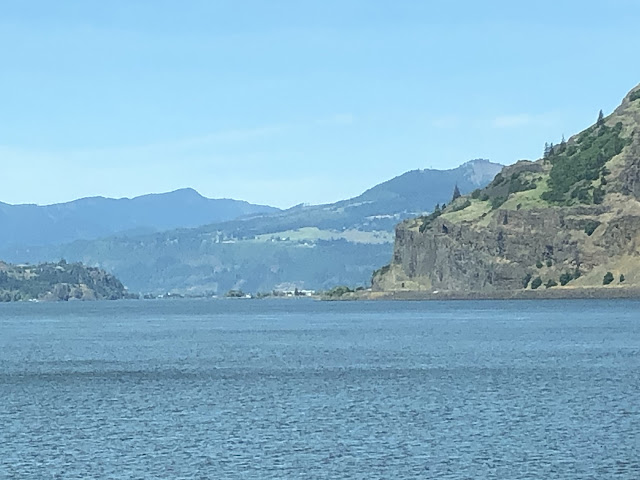 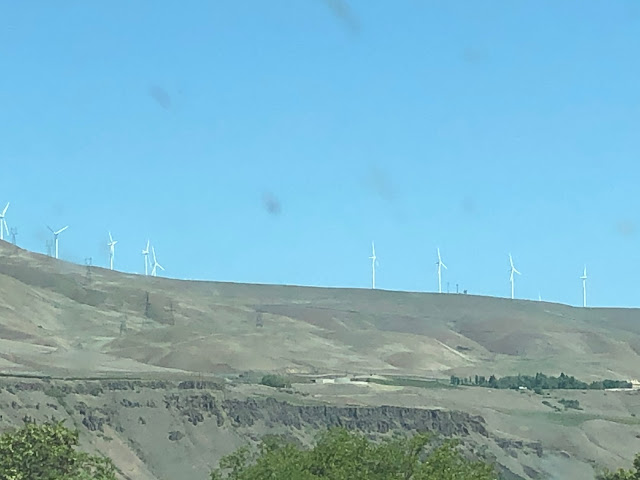 Next stop, Sand Dollar Alpacas where Nikki and Collins showed off their beautiful farm.  Collins is a whiz at farm layouts and irrigation!  Along with suri alpacas, they raise white doves for releasing at weddings, homing pigeons, bees, and soon they will also have Great Pyrenees puppies!  They have a great view of the farm from their comfortable porch, have a beautiful retail space, and a Bed and Breakfast.  If you are ever in Kennewick WA, look them up!  It was a luxury to stay with them for 2 nights.  We also had a visit from Nola and Sienna Graham while we were there. 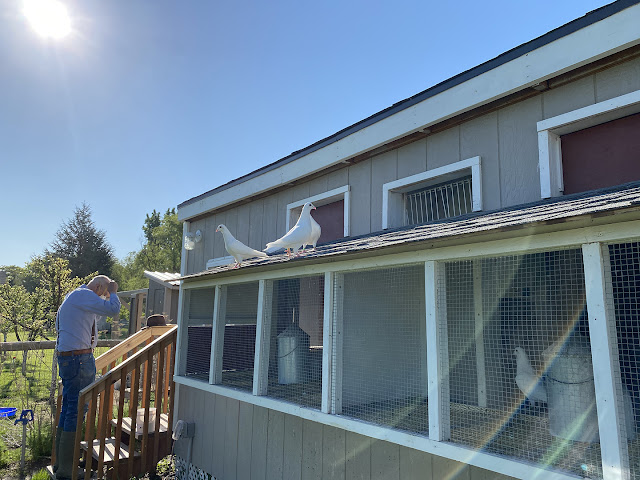 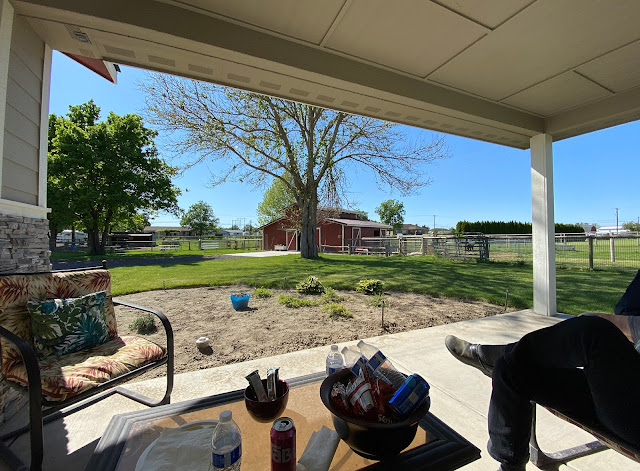 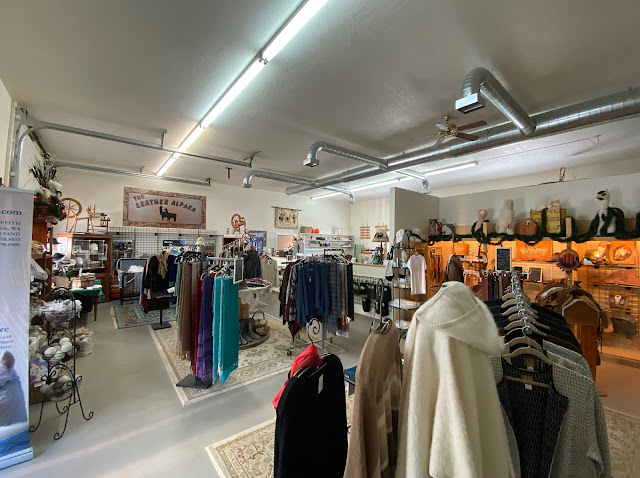 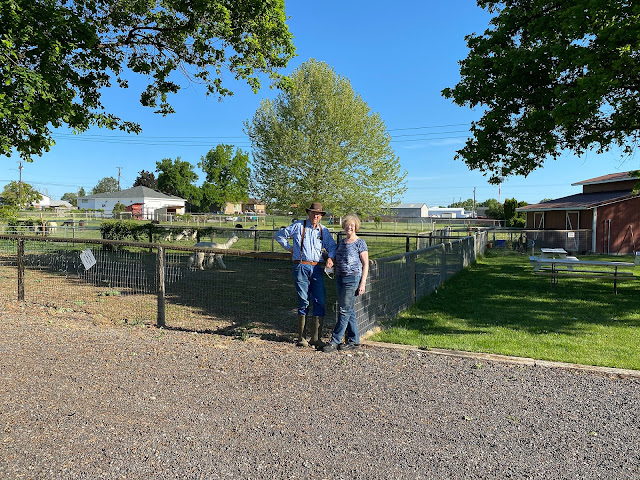 One of the reasons for visiting Nikki and Collins was to get a good look at Commander's Archangel Michael, a young male that I own in partnership with them.  It was the first time I had seen him, and I was thrilled!  He is fine and dense and lustrous and placed 2nd in stiff competition at the National Show in March (the only show there was this season 😖).  Michael came home with me so I can show him in the fall.  I sure hope we get to have a fall show! 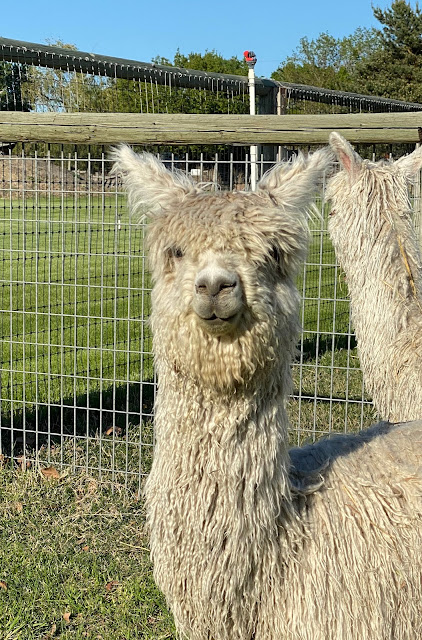 Back to Portland to visit my son and daughter who live there.  Amy is the photographer of the family, so she was in charge of setting up this shot of all of us.  She's on the right, and Brennan and fiancé Jessica are on the left.  Brennan is a chef, and while he is out of work at the restaurant, is streaming some pretty impressive cooking on Twitch. Twitch.Tv/BBBubbz  Look him up-- it's pretty fun! 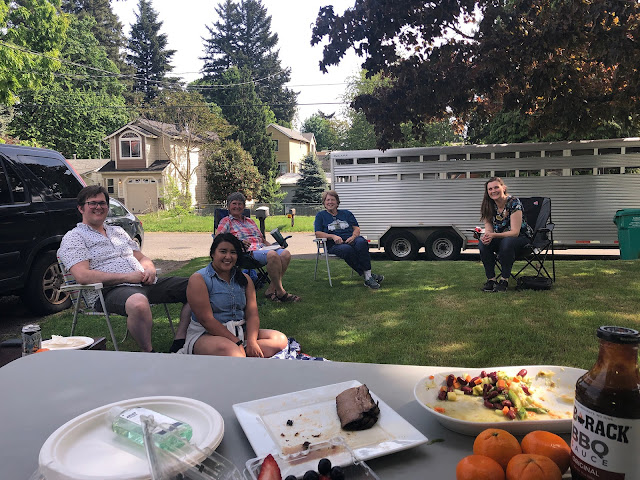 On the road home I parked between 2 giants at a rest stop.  I always feel like my trailer is huge when I'm driving it, but these trucks put it in perspective. LOL 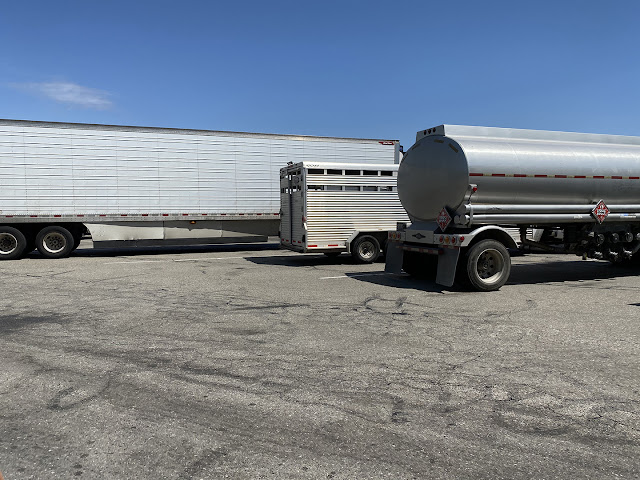 Looking out at the highway, I set the course for home.  You know how that last day of the trip is longer than any other? 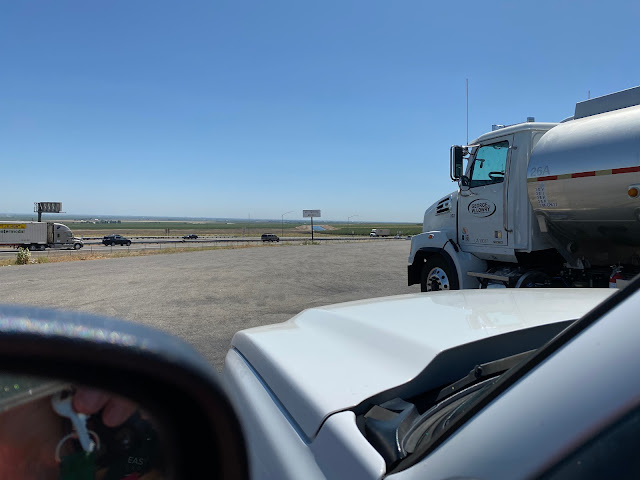 The trip up the west coast was a lot of fun and a fine adventure, but as always, there's no place like home.  Now for Cria Watch 💗💙💚💛💜 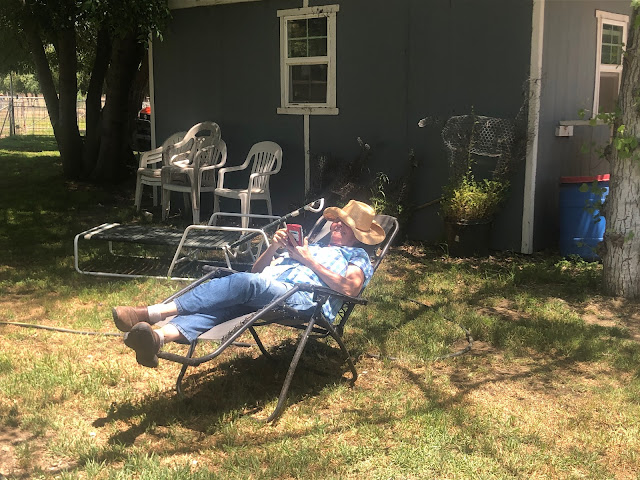