CHAMPION!  It has such a nice ring to it!  I was grinning from ear to ear this weekend when AWH Torbio's Endless Summer won his championship in Arizona.  Not only is he beautiful and sweet, but he is one of our last Torbio boys.  He's built just like his famous daddy--square and blocky with heavy, shiny fleece.  A real joy! 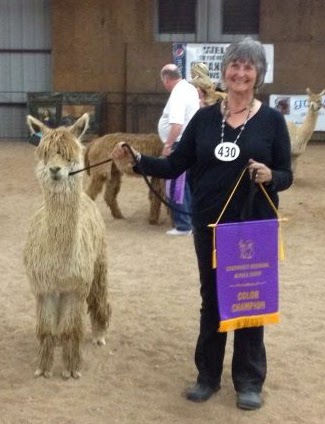 There was a time, though, when I worried about him.  When he was about 6 months old we discovered one morning that he had broken his leg just above the hock of his right hind.  How he did it will forever be a mystery!  There was no indication of anything in the pasture.  Perhaps he had caught his foot in the fence while rolling and struggled to free it, or maybe he ran too fast and stepped in one of those nasty gopher holes.  In any case, he needed the vet, pronto!, so we called Dr. Jana and she rushed over with her casting kit.

We had to shave the copious amount of fleece on his hind leg to be able to cast it.  I cringed as Dr. Jana shaved it.  I had intended this boy for the show string, and now that deal was off, maybe indefinitely.

When an alpaca breaks a limb, it can cause them to walk with an uneven gait, sometimes forever, depending on how it heals, how good the casting was (which depends on how much he wiggles and how well the holders control him), and how quickly it heals.  This was a green stick break, thank goodness, so chances were good that it would be fine.  I was thinking of the cosmetic aspect of it, though.  We would have to see.

Six weeks in a 20 X 20 foot pen is enough to make anyone stir crazy, so when it was time for Endless Summer to return to the barn for the cutting off of his cast, he was glad to be allowed to walk on a halter anywhere at all.

We put him on the shearing table to make it convenient for all concerned, and Dr. Jana revved up her cast-cutting saw.  What a racket!!  Cutting a cast always looks like it's going to cut off the limb in question to me.   But, being a good vet, she only cut the cast, which we then pried off of his leg, and examined the result.

The leg appeared to be completely healed--HURRAY!!  But the flakes of skin and the straggly fleece that had grown in the six weeks were pretty yucky looking, and I had to come to terms with the fact that this boy would not be showing as a juvenile, and maybe not as a yearling either.  Looking closely at the rest of his fleece made me almost want to cry when I thought about not showing him, but it was the only reasonable answer.

We turned Summer out for the rest of the year, shearing him on schedule.  His leg gradually got stronger and straighter.  We decided to hold him out his yearling year as well because the fleece regrowth on his leg made it look lopsided, even though his walk was now even and steady.

After his second shearing, though, his legs looked beautifully straight and strong, so we entered him in the Southwest Regional Alpaca Show for February 2014.  I hoped there was no remnant of unevenness in his gait.  It was really hard to tell sometimes because I was so used to seeing a hitch in his gitalong, but we decided to take a chance.  Endless Summer would show for the 1st time ever as a two-year old.

We took 3 alpacas for the Breeders Best Three class: Endless Summer, Wabash Cannonball, and Ste Mary.  They had 3 different herdsires and 3 different dams, but were amazingly similar despite the different pedigrees.  We took a 1st place, and the judge (Amanda Vandenbosch) had wonderful things to say about the group, so I had more confidence as I entered the 2 year old class with Endless Summer on Saturday afternoon.

Having been left primarily to his own devices other than being haltered at shearing time, Endless Summer was pretty "opinionated" about how he would walk on a halter.  I thought of Torbio, and how he resented having to wear a halter, as though it were somehow beneath him,  and I laughed.  Like Father Like Son.  To save my already sore arm (getting old is no fun!) I switched the lead rope around to give me more "torque", and Summer began to settle down, although never truly submissive.  He knows who his daddy was!

The judge examined each alpaca for a 2nd time and then asked for the champion banner. She hesitated just a moment, as usual trying to make everyone guess who she was going to award the championship to, but then walked confidently toward Endless Summer with her hand outstretched to shake mine.  What a thrill!  The championship often goes to the full-fleeced yearling in the class, but this time she chose a male who had never shown before, and had been shorn twice.  She asked me to lead him in front of the crowd while she talked about his heavy, fine, lustrous fleece, his heavy bone, and fluid gait -- apparently there was no visible trace of the broken leg!  It was a very exciting moment, made even better by the fact that the full fleeced yearling Apache son took the reserve championship! 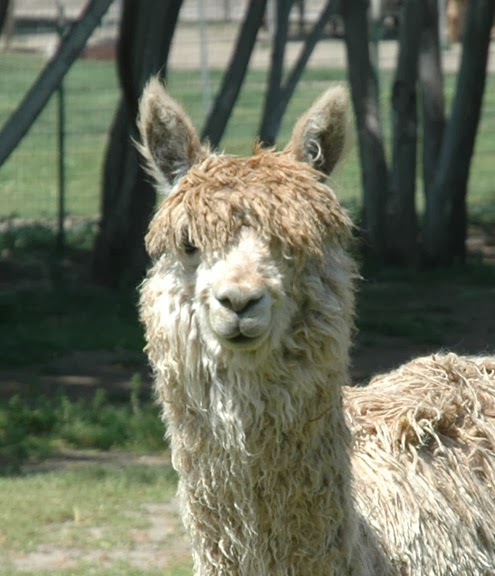 Endless Summer will show a couple more times this season before retiring to his breeding career--the reward due a male who overcame a broken leg to become a champion!
Posted by Cindy Harris at 4:59 PM